Johnny Worthy has been involved in a variety of London shows, including the original runs of Jesus Christ Superstar and Once On This Island, the West End debut of On the 20th Century, revivals of Show Boat and Guys and Dolls, plus one or two projects slightly less celebrated by posterity... 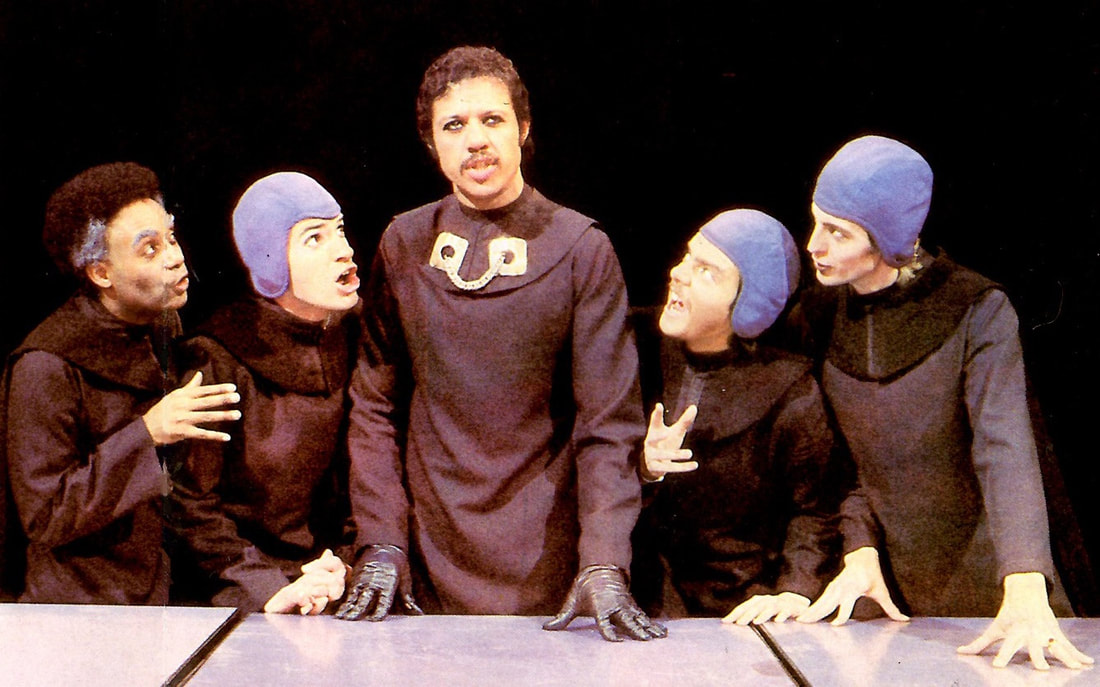 Jesus Christ Superstar ran for the best part of a decade at the Palace Theatre, on London’s Cambridge Circus.
Though well established now as part of the canon of great modern musicals, at the time of its opening in 1972, this rock opera, written by Tim Rice and Andrew Lloyd Webber, was the subject of considerable controversy. Focusing on the last few days of Jesus’s life, it was thought by many to be inappropriately flippant in its treatment of the subject matter, causing particular offence to some  Christians on the grounds that, whilst naturally featuring the crucifixion, it brought down the curtain without showing what they regarded as the main event, ie the resurrection.
​Despite these objections (which naturally helped to publicise the venture) the show went on to huge success. Numbered among the various casts of actor/singers who trod the Palace boards between 1978 and 1980 was Johnny Worthy; as well as playing Annas, one of the Pharisees plotting Jesus’s undoing (there they are in the picture above, resolving that "This Jesus must die"), Johnny was Dance Captain, and after the show finally closed in 1980, he proceeded to fulfil both roles for the touring company. 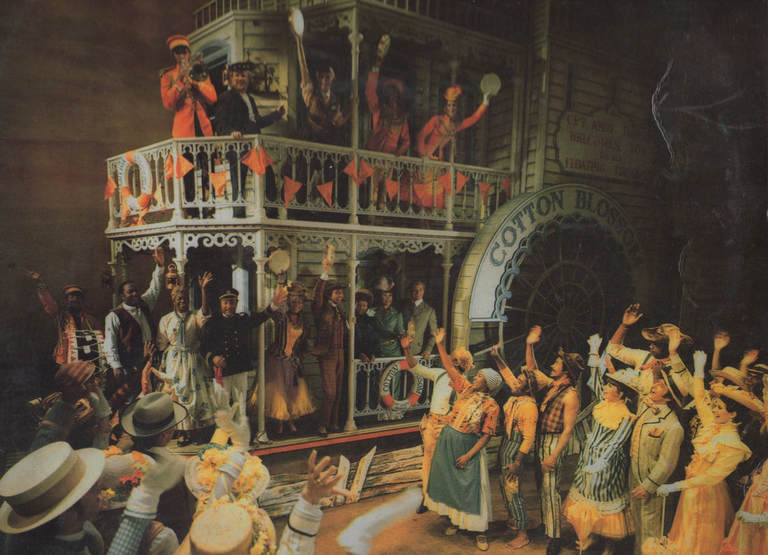 Harold Fielding's revival of the Jerome Kern/Oscar Hammerstein musical opened at the Adelphi Theatre in 1971 and ran for 909 performances.

In this photo, Johnny can be seen in the foreground, third right from centre.

Producer Harold Fielding was legendary for his meanness, and, over the course of the Show Boat engagement, demonstrated  himself to be very much the equal of his legend, stingy both in spirit and in wallet.  Invited by actor/choreographer Jeffrey Holder (aka Baron Samedi) to appear in the Bond film Live and Let Die, Johnny asked in vain for a few days’ filming leave from the West End show.
Fielding was no less committed to his monetary tightness. Johnny was initially employed on the show as a singer – at a weekly rate of £28 – but, owing to a shortfall of tap skills among the existing dancers, he was invited to join the line-up of a big tap routine that took place towards the end of the evening. Johnny was happy to help, and likewise happy to suppose that he’d be entitled to the enhanced salary (£30) paid to the dancers. When asked for the £2 raise, however, Fielding, with a friendly laugh, refused. “Your union allows me to do this,” he told Johnny.
​It was this experience that caused JW to become a lot more actively involved with Equity (for more on which, see here). 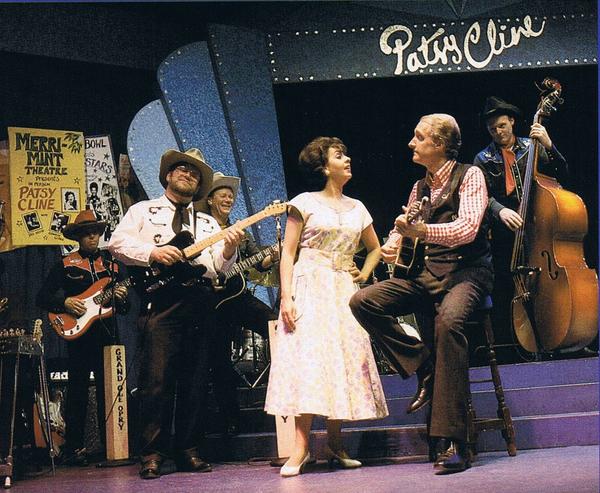 A show celebrating the life and work of the ill-fated singer adored by lovers (and, in truth, quite a few haters) of country music, Patsy Cline - The Musical boasted a script by Johnny Worthy, who also served as director and choreographer.
The show kicked off in 1994, and over the course of three years’ touring, enjoyed a three-month run at the Whitehall Theatre, in London’s West End.
Irish singer Sandy Kelly played Patsy, sharing top billing with George Hamilton IV, a country legend in his own right.

Once On This Island 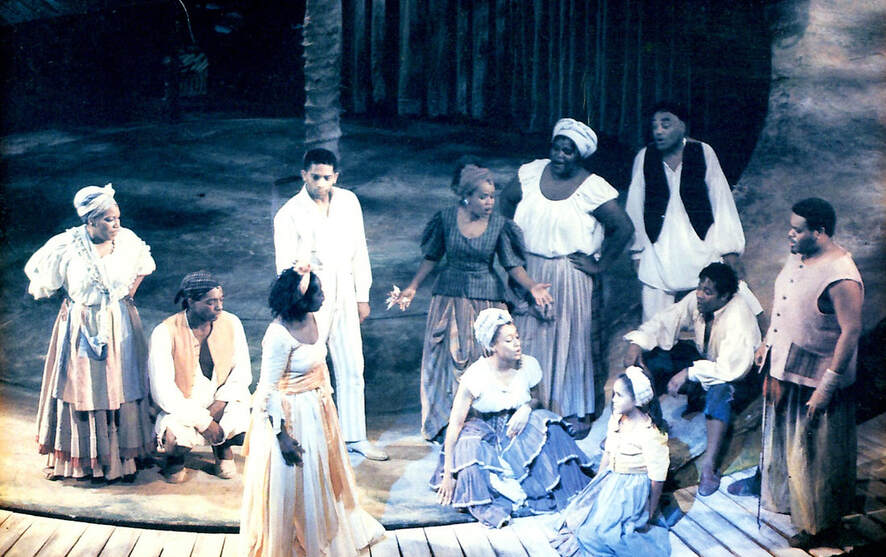 Johnny was among the cast that presented the UK premiere of Once on This Island, the musical based on Rosa Guy’s novel My Love, My Love; or The Peasant Girl.
With music by Stephen Flaherty and book and lyrics by Lynn Ahrens, it was first seen on Broadway in 1990, and crossed the pond four years later. Aside from JW, the Birmingham Rep’s cast featured Clive Rowe, Suzanne Packer, pop legend PP Arnold, Shezwae Powell, Mark Vincent, Trevor Michael Georges, Lorna Brown, Anthony Corriette, and Sharon D Clarke, since seen in Chichester’s smash hit Caroline, or Change.
​Choreography was by David Toguri, with whom Johnny had previously worked, on Hair and Guys and Dolls.
The production moved south to take up residence at the Peacock Theatre in London. Johnny, as well as performing, served as Resident Director during the West End run.
At the following year’s Olivier Awards, Once On This Island beat three other shows, including Barry Manilow’s Copacabana, to be named Best New Musical; unfortunately, it came too late to help promote the show, which had already closed.

On the 20th Century 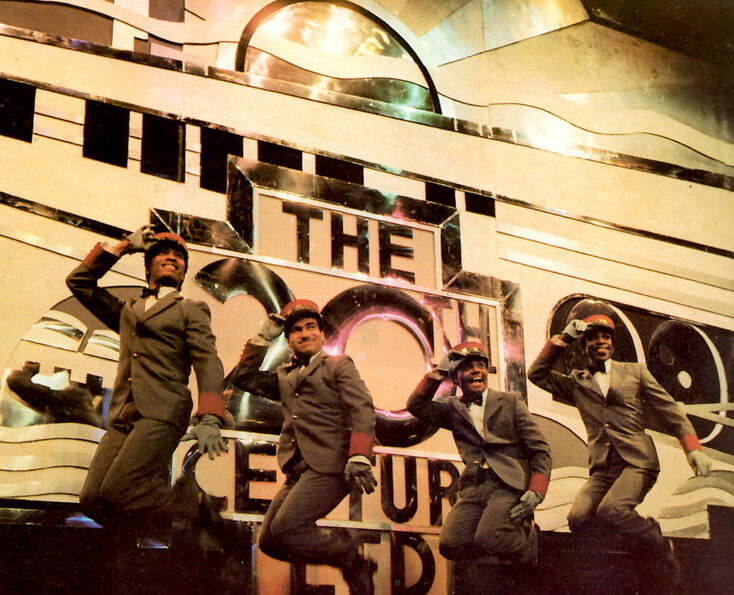 Based on a Ben Hecht/Charles MacArthur play and the ensuing film adaptation by Howard Hawks, On the 20th Century was a musical written by Adolph Green and Betty Comden, the team that, among other things, had written On the Town with Leonard Bernstein.
Opening on Broadway in 1978, it won five Tony Awards, including one for up-and-comer Kevin Kline.
Two years later, it opened in the West End, with Julia McKenzie, Keith Michel, David Healy and Mark Wynter leading the cast.
JW was Dance Captain on a fiendishly difficult song-and-tap number involving himself and three others playing porters on the eponymous railway train. So fiendishly hard was this routine that Johnny, not usually known for his defeatist attitudes, complained to conductor Ray Cook that ​"It's impossible to sing and tap at the same time!" The conductor replied, "They did it on Broadway, John..." No more was said on the matter.
Going into previews, the show was packed out every night with rapturous audiences. Press night, however, was followed by a set of lukewarm reviews, and though, traditionally, that’s not quite the kiss of death the way it is on Broadway, business ebbed away. Still, the show did 165 performances, and in the SWET Awards (Society of West End Theatres – since rebranded as the Oliviers) earned nominations for Best Musical and Best Actress in a Musical (Julia McKenzie).

Back to the top